Ḥaḍrat Shaikh Muḥammad al-Muḥammad al-Kasnazan al-Ḥusseinī (may Allah sanctify his secret) has recommended that, in seeking the blessings of mentioning the names of our beloved Muḥammad, the Chosen One (ṣallā Allah ʿalaihi wa sallam) and ḥaḍrat Imām ʿAlī (peace be upon him), the dervish should conclude the dhikr after the dawn prayer with reciting the following dhikr one hundred time: “Muḥammadun nūrun (Muḥammad is a light) bābuhu ʿAlī  (whose door is ʿAlī)” (71.10-12). This dhikr brings help, power, nearness to Allah, and happiness for the people of the Ṭarīqa, in particular, and the Muslims, in general. The Prophet (ṣallā Allah ʿalaihi wa sallam) said: “I am the city of knowledge and ʿAlī is its door”, and our Shaikh (may Allah sanctify his secret) said that one night in 2000 CE (1474 Milādī Muḥammadī) in Istanbul, shortly before the prayer of dawn, he heard, while awake not asleep, a voice from heaven saying: “Muḥammadun nūrun bābuhu ʿAlī”.

We encourage the followers of our blessed Ṭarīqa to benefit from these lights and avail themselves of these divine gifts, for the Prophet (ṣallā Allah ʿalaihi wa sallam) said: “Your Lord sends gifts on certain days so put themselves in their way that you may receive one of those gifts so that you will never be wretched afterwards.” 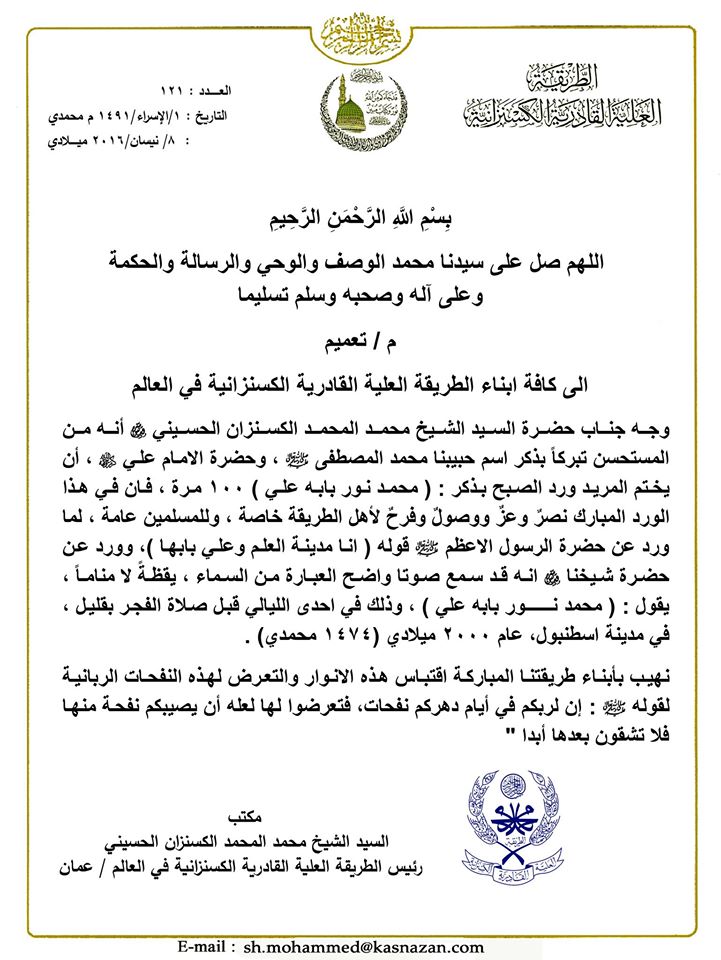