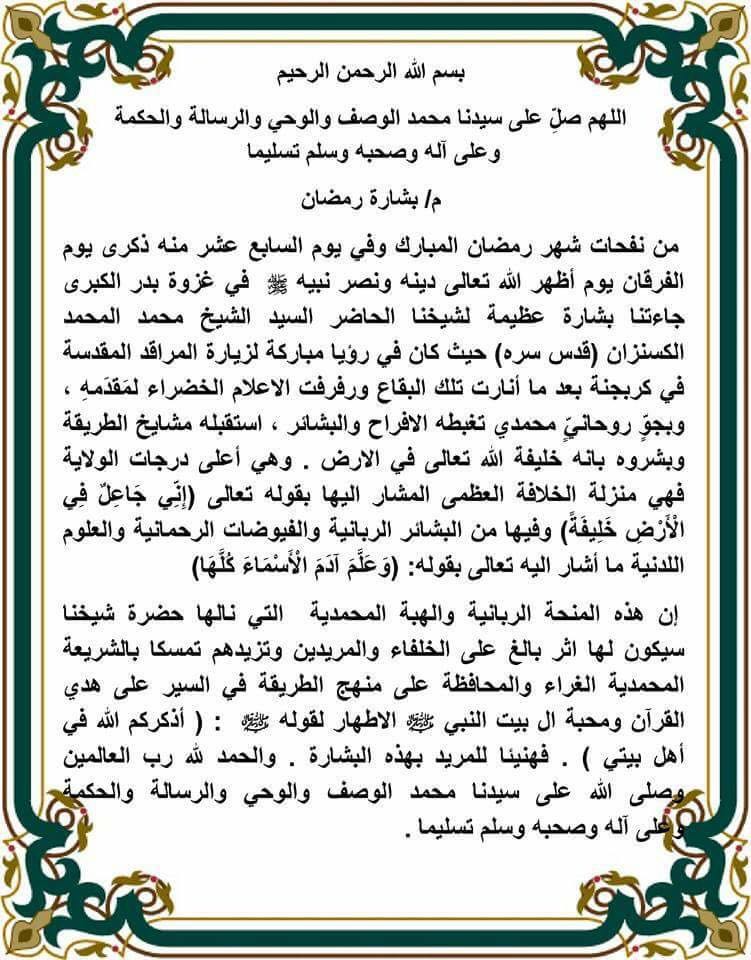 One of the gifts of the blessed month of Ramadan is that on the 17th of the holy month, which is the anniversary of the day of distinguishing between good and evil when Allah made His religion prevail and aided His Prophet and (ṣallā Allah ʿalaihi wa sallam) in the Battle of Badr, our Present Master Sayyid Shaikh Muḥammad al-Muḥammad al-Kasnazān al-Ḥusseinī (may Allah sanctify his secret) received great good tidings. He saw in a vision that he was visiting the holy shrines in Kirpchina. The area was illuminated and the green flags were raised in celebration of his visit. In a spiritual atmosphere filled with happiness and good news, he was received by the Shaikhs of Ṭarīqa who gave him the good news that he is the khalīfa (representative) of Allah on earth. This is the highest degree of wilāya (sainthood), because it is the status of the greatest representation, which is referred to in Allah’s words: “I am going to put on earth a khalīfa (representative)” (2.30). It includes godly good tidings and emanations and the divine sciences that Allah mentioned in this verse: “He taught Adam all the names” (2.31)

This godly gift and Muḥammadan present that our Shaikh has been given will have a great effect on the khalīfas and dervishes. It will help them in observing the honourable Prophetic Shari’a and adhering to Ṭarīqa in following in the guidance of the Qur’an and loving the purified family of the Prophet (ṣallā Allah ʿalaihi wa sallam) about whom he (ṣallā Allah ʿalaihi wa sallam) said: “I remind you of what Allah said about my family.”