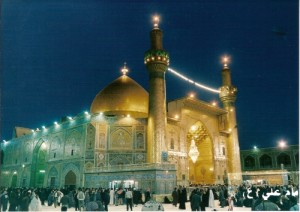 Imām ʿAlī [karrama Allah wajhah] is the only person to be born inside the Kaʿba, in Macca. He was born in 599 CE. Imām ʿAlī’s mother named him “Ḥaydara” which means “lion”. But it was Prophet Muḥammad (PBUH) himself who gave him his most known name. He held the newborn high and said “ʿAlī” which means “high”. About thirty years later, during the conquest of Khaibar, the Prophet (PBUH) conferred on Imām ʿAlī another of his famous titles, “al-Karrār” which means “the attacker.”